I am very upset, personally and as a department head, that you chose to make certain statements in the CF 11 Souvenir Book with regards to last year’s convention, CFAC, and the Behavior Policies.  I feel that comments about last year as a “disaster” are incredibly unfair to the CF 10 staff who worked their asses off to make it happen despite the many misfortunes CF 10 experienced.  Other comments do not affect me personally but do affect some of my friends and were not only unfair but more to the point, derogatory to CF 11 and your own image as proprietor of the ConFurence Group.  I will go into specifics if you wish.

Permit me to emphasize this for a minute.  You have much to lose and nothing to gain by assigning blame to anyone, let alone the prior owners of ConFurence.  CF 11 would not run without their enthusiastic and selfless support.  Many people will be shocked and offended that you thanked the staff of CF11 and pointedly did NOT thank Mark and Rodney, who created the only value The Confurence Group™  currently possesses – eleven years of running the best furry con ever.

I am very surprised that you did not ask me to review and comment on a draft of the CF 11 CFAC and Behavior Policies given both my role and my expertise.  I also understand that neither your co-chair or your head of CFAC were given opportunity to review these policies. There is nothing to do about this for CF 11, but these policies need to be reworked for CF 12.  They are unnecessarily offensive, incorrect on legal points, and about three times too long.  I am amazed that the input of your co-chair and CFAC chief was not sought.

I understand from Carol that you do not intend to provide a liability statement on this year’s Gopher forms.  Unless a liability statement similar to that used by other sci-fi conventions is on the Gopher form, neither Carol nor myself will work CF 11.  This is because we would incur personal legal liability in the event that The Confurence Group (YOU!) is sued and Gophers are considered employees rather than volunteers.  Carol and I discussed this repeatedly and forcefully at a Lead Staff meeting two months ago.  This is a NO-GO item until resolved.

I am concerned as Lead of Convention Operations about the chain of command for CF 11.  In particular I am aware that co-ordination between you and your co-chair is not what it should be – a matter that needs direct discussion between the two of you.  At present I am in the uncomfortable position of getting approvals and providing information items only at meetings where both of you are present. Further, I am unclear on the role of Glen Wooten as “Office of Strategic Services.”  Based on comments that you and Zee have made I am considering him your personal assistant and taking the view that he is authorized to speak for you when he gives orders.  Please inform me immediately if this is not the case.

I want to reiterate my continued support for CF 11 and for you as CF 11 co-chair.  I choose to believe that these issues are the result of confusion, miscoordination and sheer work overload rather than personality issues.  I encourage you to share the work as much as possible.  I also encourage you to deal with any sources of stress in your personal life that might be affecting the convention.

Last but not least, I stress to you that no one person can run an entire convention.  You are utterly dependent on the enthusiastic and willing cooperation of over fifty other people to hold a successful convention.  It is much better to bend over backwards to include staff in decisions than it is to make decisions unilaterally or behind closed doors.  It is essential that you make extraordinary efforts to publicly appreciate the hard work of all the people who make ConFurence possible.

Editor Note: This is the article from the Confurence 11 conbook that caused issue with constaff. 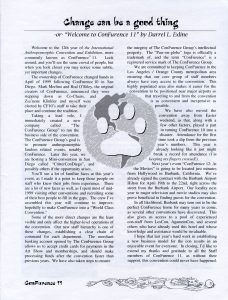